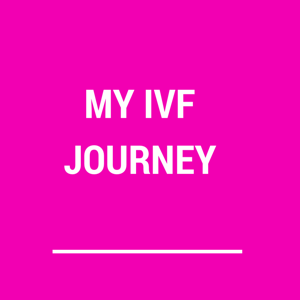 Day 12
Wow it’s been a long ride but I successfully made it to egg retrieval and I am not sure what to expect! I just know I don’t want to feel anything and I want to wake up after it’s over! 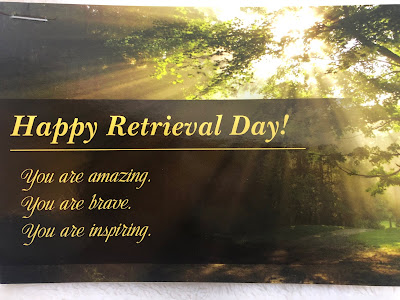 The process for us is a difficult one because egg retrieval’s are done in the morning hours. And my partner isn’t a true morning person he struggles in the morning (moves very slow) and functions best after 10-12 pm time frame. So with that said we planned to stay in a near by hotel near the facility but unfortunately all of the rooms were sold out! Thankfully we have an RV that we barely use to sleep overnight and be on time for my 9:30 am call time. It was the best decision we made because I can’t afford to miss this day!

The day of egg retrieval I really didn’t know what to expect, I wasn’t super nervous until I finally got into the room. I just knew that I had took on a lot for this IVF cycle and this part felt the same. And I wish that the steps that women have to go through were more balanced when it came to it. I was very in my head but there was nothing I could do but go along with it. I was already there and I had completed everything that I needed to for the next chapter of becoming a mom. It’s was all about being what we as women were built to do! 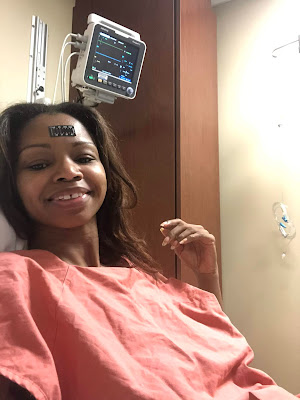 I was told the procedure would be 15 minutes and that I would sleep like a baby!...I went in the operating room. I spread my arms out and had to place my feet on the similar placement like during an ultrasound. It was a bit different because it was higher and I had to spread more wider. I already had been given my sleepy pill in my IV so once I placed my foot down. I was out!

When I woke I was in a daze, I was given crackers to eat (salty). I was shown how many eggs were retrieved 6 which meant that the original 8 were a loss number. Unfortunately we had to accept the lower number but we were thankful that it was something. Yes, I felt cramping after it was over for sure! (Below is a list of things needed after). 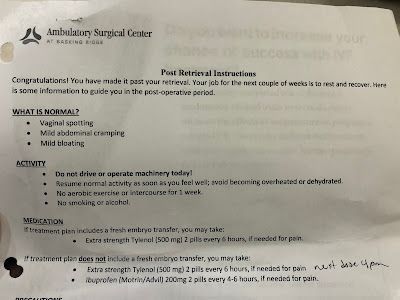 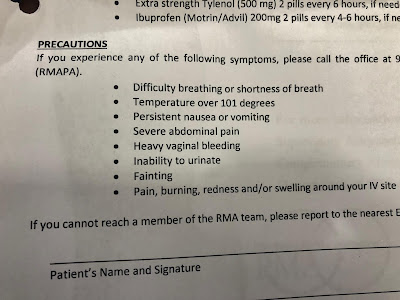 Now we pray, call our family members and wait for our doctor to call tomorrow with the number of how many eggs fertilized.
Stay tuned for Day 13 and wow the thought of that number now puts everything in perspective.