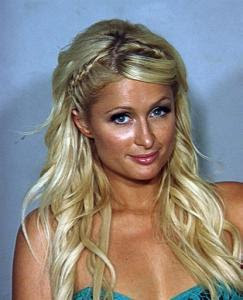 Okay, I will admit this photo looks good! But again Paris!
The scoop: Police followed Paris and her rich boyfriend Cy Waits, (partner of the Tryst Nightclub inside Wynn Las Vegas, Drai's after hours club at Bill's Gamblin' Hall & Saloon, and XS The Nightclub at Wynn's Encore resort) Escalade because it had a suspecting odor of marijuana, (can't believe it was that strong). Once stopped police did a random search. As Paris opened her glamorous diva clutch she pulled out her lip balm (love the pink) and accidentally drop also a bag of white substance which tested positive for cocaine.
Paris claims "Hey It's Not Mine"
Just when we thought Paris was still "HoT".
Twitter @ParisHilton
Posted by CPD at Monday, August 30, 2010